With decades of performing and teaching experience under their belts, we believe our team of tutors are the best in Norfolk. We regularly welcome guest tutors to The Oak and have a strong focus on professional development.

Andrew started his career as a dancer working with choreographers such as Nigel Lythgoe, Norman Main and Jeff Ritcher. After several years with The Second Generation Andrew turned his attention to acrobatics and physical comedy, touring the world with one of the most famous comedy acts for over ten years. Performances have included The Children’s Royal Varity Show, Monte Carlo, Scala Madrid, Stars in Ménage with Tony Curtis, numerous television appearances, a three year tour of the USA and Canada with TZ’s three ring circus where he had a chance to learn many circus skills which helped Andrew become part of Barnum (National Tour) and Dr Dolittle (Apollo Hammersmith) and various commercials. Andrew was part of the Millennium Dome central Arena Show and visited the USA as Artistic Director and Choreographer for the Circus Atayde. He then went back to working in theatre in musicals; Anything Goes, Fiddler On The Roof, Carousel (National Tours) Seven Brides for Seven Brothers (National tours and West End) The Lord Of The Rings (West End) and Love Never Dies (West End).
Filming work includes being the body for Ernie Wise Children in Need Hologram , various adverts and being a Wonderland Clown in Tim Burtons ‘Dumbo”
Among other achievements Andrew is joint Guinness World record holder for the longest somersault and artistic Fencing World Champion.

Core team tutor
Tasha was a high level artistic and acrobatic gymnast for 10 years, competing regionally and nationally. After her competitive years she became a qualified gymnastics coach, and has been coaching a wide range of ages and abilities for the past 8 years. This led her to discover circus and specialise in hand balancing and aerial arts. Tasha is an active performer as part of the Lost In Translation Circus team and recently wowed audiences at the Circus250 launch party in Natural History Museum beneath the iconic skeleton of Hope the whale. Tasha has been teaching for The Oak for the last 3 years.
Read more

Core team tutor
Lawrence is a circus performer and actor. He is a recent graduate from Circomedia in Bristol and The Oxford School of Drama. Since leaving education he has worked with Sin Tiempo in Lima Perú and performed in many plays around England. He Is now working with Lost in Translation circus in Norwich. His disciplines are handbalance and acrobatic base.
Read more

Matthew has been working in circus for the last 15 years and is currently the head of youth circus here at The Oak as well as a core tutor. With a high level in circus skills he has performed and taught in a range of prestigious venues around the world and has been a core artist with LIT circus for over 5 years. Having graduated from The National Centre for Circus Arts he has built up a large repertoire in performing arts which he endeavours to pass on to even the most apprehensive of students. Previously Matthew has run several of his own adult and youth circus courses in London and loves engaging with people of all abilities and backgrounds to reach their full potential.

Roisin trained as an artistic gymnast and competed in the 1997 Youth Olympics, going on to win the Irish National Individual title two years running. She later trained as a dancer, learning everything from classical to hip-hop styles and musical theatre. Roisin completed her degree at The National Centre for Circus Arts in 2009. She has done stage and film work and performed in circus shows and big productions touring Europe and the USA specialising in hand to hand, acrobatics and aerial disciplines. Along with her partner Massi they hold two Guinness World Record for the most somersaults performed consecutively on a Korean Cradle in one minute.

Guest Tutor
Kate trained at, and then taught at, both The National Centre of Circus Arts and Middlesex University Theatre Arts Faculty. Kate is a ‘Cirque du Monde’ (Cirque du Soleil’s social circus project) trained facilitator in social circus and has been teaching theatre and circus for over 15 years.  Kate has worked in the Outdoor Arts performing with her own company Creature Feature until 2007 and thereafter in collaboration with others including An Act Above (stilts/aerial) and the Bicycle Ballet Co. (street theatre/dance).  She moved back home to Norwich in 2017 and started teaching for Oak Circus.  Kate is also an associate artist with Norwich-based Theatre company Hocus Pocus theatre.
Read more
Staff

ARTISTIC DIRECTOR & FOUNDER
Massimilliano has 20 year’s experience performing, teaching and consultancy in Circus productions. He has a multi-dimensional background in circus, theatre and cinema and gained a Guiness World Record in 2015. He has performed for No Fit State, Cirque Hirsute and Magmanus worldwide. He is an active performer and the co-founder and company director for Lost in Translation Circus. His passion to teach Circus professionals and enthusiast led him back to Carampa circus school where he graduated in 2003. He also trained at No fit State circus, Let’s Circus and The National Centre for circus Arts where he formally got is BA Hons. He is now the Co-founder and CEO of The Oak Circus Centre and a core tutor in the space.
Read more

Head of Education & Founder
Annabel’s journey began at Australia’s famous Flying Fruit Flies Circus at the age of just 12. She then went on and graduated with a Circus Arts diploma from NICA, Australia’s National Circus School. Annabel’s performing career has taken her around the world with companies such as No Fit State Circus, CiRCA and The Insect Circus, as well as working as an independent artist for numerous cabaret shows, artistic collaboration projects, and corporate events. Annabel has been teaching circus since she was 16, and has taught for numerous circus organisations, schools, festivals and events in Australia, Ireland, France, Italy and the UK. She has been part of designing targeted long-term circus programs for a number of organisations during her career. In 2011 co-founded Lost in Translation Circus along with Massimiliano, and is still co-director. Massi and Annabel co-founded The Oak Circus Centre in 2016, and Annabel is now in charge of the entire education program.
Read more

Our circusy website uses cookies to ensure you get the best experience on our website. If you continue to use our site we will assume you are happy with this.

A venue for all occasions

Make their birthday party the talk of the playground…

Do you need a venue for your business event, staff party…

All about the Venue

The Oak Circus Centre is an extraordinary and flexible venue that can be adapted to create a unique setting for your own event.

A venue for all occasions

Make their birthday the talk of the playground with a circus party...

Do you want a new and unique venue for your business event, staff party or...

The Oak Circus is a unique creative space with high quality circus facilities...

More about our Venue » 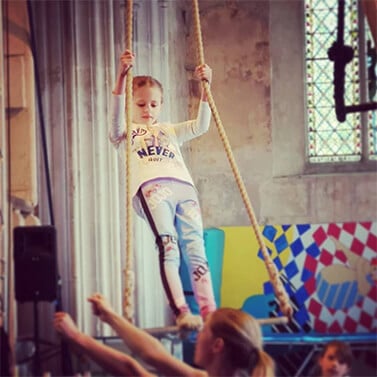 Tell us a little about your ideas and party size and we’ll get right back to you.

*Preferred dates (parties are usually either Saturdays from 4pm or Sunday mornings, but we can often accommodate other times or days). You can list 2 or 3 options, or simply a period (ie: any Saturday in August).

View all our Classes »